“The Red Coat – A Novel of Boston,” by Dolley Carlson 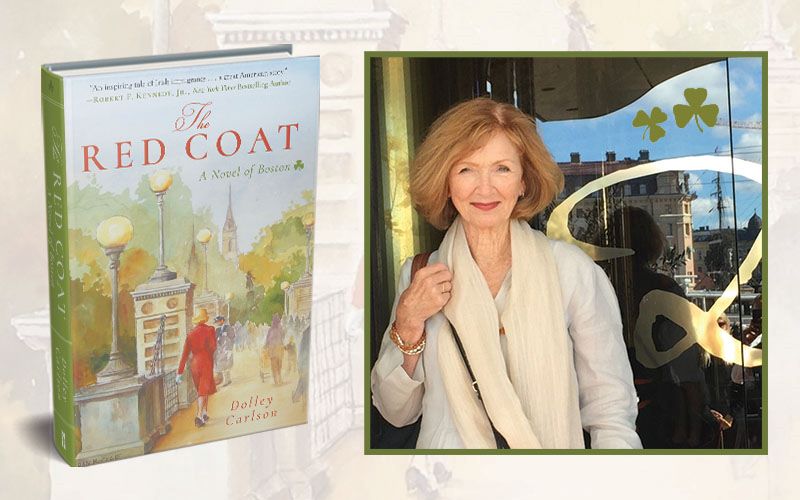 Dolley Carlson is a third-generation Irish American with South Boston roots, and the daughter of one of Boston’s finest. In her first novel (published at the age of 68!), “The Red Coat – A Novel of Boston,” Dolley tells the story of Norah King, an Irish domestic worker who asks her rich employer for an elegant red coat marked for donation to a charity. From that event, Dolley weaves an engaging story of Celtic passion, words of wisdom, romance, humor, and local history circa 1940s and 50s – from Southie to Beacon Hill.

We were thrilled to catch up with Dolley…

Dolley, congratulations! What a wonderful story. You started writing The Red Coat in your 60s – what gave you the inspiration, and how did you find the time?

Through the years my friends, family and colleagues have always told me “you should write a novel!”

But there was life! Wife, mother, professional speaker with a great deal of travel required of me, and the “tyranny of the urgent” forever present.

When in the world would I have time to write a novel? I knew I had one in me and was delighted at the prospect of putting the story together but the time to do so just wasn’t there.

And then, as you mention, there was my age. I feared it was too late, especially after an acquaintance chirped at a party, “Bet you wish you’d started when you were younger!”

Ah yes, those helpful comments. But you did it!

I am delighted to say it is never too late! Never too late to chase your dreams and make them come true. It took me 7 years to write The Red Coat – A Novel of Boston, but at age 68 I’ve published my first novel!

Did you have experience as an author before The Red Coat?

I’d already written four nonfiction gift books so I knew the path required diligence, determination, fortitude and vision. But a novel was a completely different work requiring even more.

Time marched on. Then, one weekend I impulsively signed up for a writing seminar at a nearby university. The spark had been lit! Subsequently I had an opportunity to attend a year-long master writing workshop.

You first self-published and promoted the book, and then something amazing happened!

That’s right! Initially I published the book independently because my agent at the time only represented nonfiction. My husband and I approached independent bookstores and gift stores, and I brought copies of The Red Coat to my speaking engagements. However, the most effective marketing came from word of mouth. Thank you, readers!

The book sold well, and then I received an email from Barnes & Noble. They had many requests for the book and were interested in carrying it in their stores.

Then a publisher said they’d like to buy the novel! It was a dream come true. Skyhorse Publishing and now Simon & Schuster have given this work of my heart national and international exposure and I’ve received endorsements from people whose work I’ve admired. For example, Robert F. Kennedy, Jr. said, “The Red Coat is an inspiring tale of Irish immigrants; it is a great American story that affirms the lives and honors the sacrifices of all the immigrants who have made and continue to make this country great.” And WBZ personality Joan Quinn Eastman said, “As engaging as Downton Abbey, The Red Coat is a gift to be shared. Carlson has captured the uniqueness, heart and history of Boston’s Irish and Brahmins.”

My first Boston book signing was at Blackstone’s of Beacon Hill. My late father was a Boston Police officer, and his first assignment was Station 3 on Joy Street. His beat would have gone right by Blackstone’s. At the book signing I felt him with me and could almost hear his whisper from Heaven, “Good work, honey! As you were.”

Dolley, thank you for this beautiful story, and for taking the time to talk with us!

Meet Dolley Carlson at her book signing, May 19 at Blackstone’s of Beacon Hill

Dolley will sign The Red Coat – A Novel of Boston at Blackstone’s of Beacon Hill, 40 Charles Street, May 19 from 12-2pm (the same day of the Hidden Gardens of Beacon Hill Tour – why not treat yourself to a day in town!).

And, you can buy The Red Coat – A Novel of Boston wherever books are sold, including…

To learn more about The Red Coat – A Novel of Boston and Dolley visit www.theredcoatboston.com, where you’ll find an excerpt of Chapter One, vintage photos of Boston -– and a recipe for delicious Irish Soda Bread.

Dolley is happy to meet with book clubs via Zoom as her schedule allows. You can reach her at [email protected]

A special person’s quest to help feed the hungry around the globe.

Great picks from our Editors!